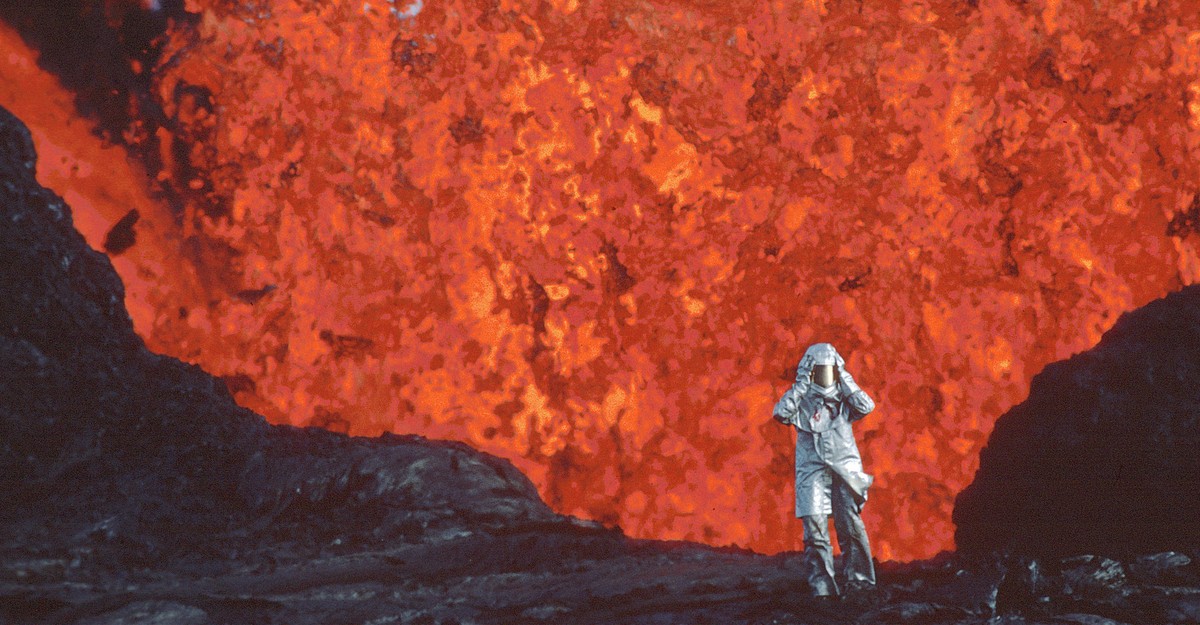 fire of love, a documentary about two volcanologists, begins on a tundra. They’re on their way to another volcano, but there’s no boiling lava in sight, no steaming geysers, just mounds of icy slush and wind-carved snowdrifts, making the hike as difficult as it gets. .

Yet it is the charm of fire of love: Even without a volcano onscreen, the audacity of the two tiny humans at its center is quite striking. The film, which will be released in select theaters this month, follows Maurice and Katia Krafft, a married French couple who spent the 1970s and 1980s studying, as the film puts it, “how the Earth’s heart beats”. The film is based on approximately 200 hours of jaw-dropping expedition footage the Kraffts amassed, books and journal entries they wrote, and interviews they gave. As told by filmmaker and actress Miranda July, fire of love offers a wealth of stunning imagery and fascinating insight into how volcanoes work, tracing how the Kraffts pieced together their findings through meticulous research and hands-on analysis.

But fire of love is as much tragedy as wonder. In its opening minutes, July’s meditative voiceover warns the viewer of the Krafft’s eventual death at the foot of Mount Unzen in Japan in 1991, casting a melancholic veil over the narrative to come. Maurice and Katia’s courtship is depicted through whimsical yet nostalgic animated sequences; the unusual approach fits their unusual, even mystical relationship as two people who seemed destined to live and die together. Through fire of love, director Sara Dosa views the Kraffts with reverence and concern, translating their story into a singular fable about doomed love and the lure of the unknown. The result is more than just a nature documentary. It’s one of the most moving and compelling films of the year, a meditation on the wonders of nature and human curiosity.

Read: 16 independent films to get excited about this year

After all, the Kraffts left behind a treasure trove of images that captured their personalities. The pair had a knack for stylish shooting. Maurice was the videographer, following the movement and scale with whip-lash zooms of the French New Wave; Katia, the photographer, took precise photos of the smallest details. The editing turns these artifacts into a delightful collage, while the film’s exuberant score even renders a shot of a boulder rolling down a climactic hill. By treating the Krafft image cache like cinema, fire of love gives the public the opportunity to see the volcanoes as the couple did: as works of art.

The Kraffts also had a mischievous flair for the dramatic. They often posed in front of walls of fire, beside rivers of lava, or on the lips of volcanoes, as if to challenge the viewer to reach up to the screen and pull them back from the edge of the apparent abyss. July’s raucous narration is equally cheeky; it sometimes seems like she responds directly to Katia and Maurice, gently teasing them for their affection towards their hot topics. fire of love deftly weaves these eccentric flourishes into his thoughtful examination of the Krafft’s devotion to volcanoes. This highlights the otherworldly look of the footage they captured, juxtaposing them with the couple’s deeply human desire to understand what they love.

Read: The paradox of the volcanologist

As the film progresses, it subtly shifts from a playful legend of two eccentric scientists to a darker philosophical contemplation of their shared love. Volcanoes were apathetic towards the Krafft, of course, but the Krafft grew bolder in their quest to solve the mysteries they held. They stopped studying the softer red volcanoes, running to gray volcanoes – those that erupt in plumes of ash and smoke that often kill humans – instead. “It will kill me one day,” Maurice said in an interview, “but I don’t mind at all.” The film seems to approve of his confidence, often applying his voiceover to beautiful shots of flowing lava.

But it also lingers on the duo’s final moments, retracing how they got closer and closer to Mount Unzen, seeking a better view, a better angle of the explosion they knew was coming. Were they fearless or had they become too enamored with volcanoes to fully consider the danger of their work? What drove them to pursue their noble quest for understanding, when they knew it would likely end their lives? The film does not deign to provide answers. But he still understands that there was something magical and haunting about the way the Kraffts chose to live and, by extension, die.

I saw fire of love several times now, and each viewing revealed a detail I had missed. Near the end of the film, for example, I spotted bandages on Katia’s left leg that I certainly hadn’t noticed on my first watch at Sundance. The blow barely lasts a second. Yet I wondered how she had gotten this injury, if it was a memory of an expedition, a foreshadowing of the danger to come. It inspired a new curiosity, even an appetite for another rewatch. Perhaps this same desire to observe and understand as much as possible was what drove the Kraffts to climb volcanoes again and again – the experience renewed each time, regardless of the number of previous ascents.