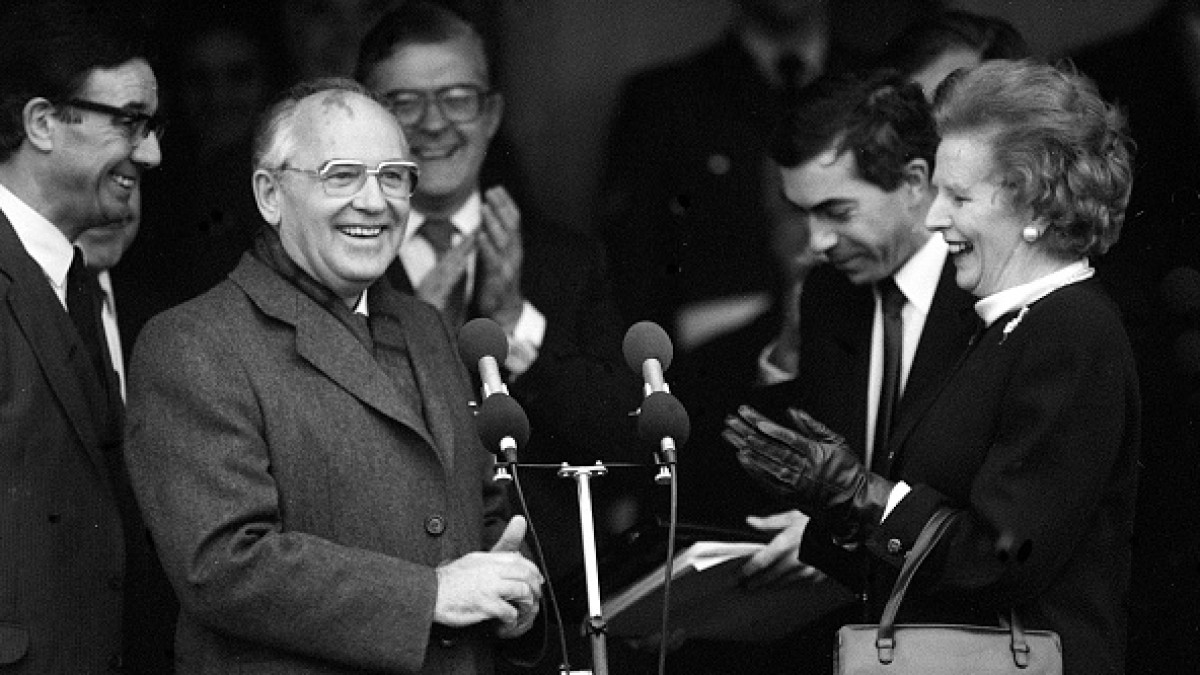 As the West looks for ways to engage with Russia after the invasion of Ukraine, remember the friendship that once brought the two blocs together during a crisis and changed the world. It was in the mid-1980s. Another country was under Soviet occupation. Afghanistan had become the scene of the Cold War, with the United States backing the Mujahideen against the Soviets. In the midst of this, Mikhail Gorbachev visited England at the invitation of Prime Minister Margaret Thatcher in December 1984. He was only a member of the Politburo then, but the shrewd woman immediately sensed that the visitor was d a different chip. She invited him and his wife Raisa to her country residence, which immediately led to a friendship unprecedented in Western-Soviet relations. Thatcher was quick to declare that he was the man “you could do business with”. A series of rapid negotiations followed. The Berlin Wall was dismantled in less than five years. The Cold War was over.

Such were the unexpected returns that Gorbachev’s biographer Gail Sheehy later wrote that “even the Queen of the West could not have foreseen the turn their discussions would take.” Years later, Gorbachev recalled that a “special relationship was born” at the December meeting that “contributed to a change in the atmosphere between our country and the West and to the end of the Cold War”. .

It’s a great example of what politicians, often labeled as skeptics, can accomplish with confidence and camaraderie. International friendships are forged on the anvil of the art of governing. Senior central government officials once told this correspondent that before Prime Minister Narendra Modi makes a foreign visit, the Prime Minister’s Office often queries the National Archives about any unique connection between the two countries. . The gifts Modi brings to other countries often reflect the research undertaken by Archives staff.

Politics is a public display of raw emotions. A gesture gains power when the memory of a friend is added to it. On her way to prison after her surrender to the police in February 2017, VK Sasikala stopped at the Jayalalitha memorial in Chennai, prayed with folded hands and then stunned onlookers with her “triple vow of revenge”. She slammed the memorial stone three times with her right palm, with multiple emotions overflowing on her face. They were once the most powerful women in Tamil Nadu, the sole keepers of each other’s secrets. Amma had passed away months before, Sasikala’s own career seemed almost over, but the embers of their friendship still smoldered.

Death also brings together two people who were not always on the same dividing line. Jawaharlal Nehru and Subhas Bose had ideological differences, but Kamala Nehru’s prolonged illness and death brought Bose closer to Nehru, albeit for a short phase. Bose cared for her in her final days, even arranging the final rites. This was also the period when Bose himself fell in love with his future wife, an Austrian named Emilie Schenkl. Kamala’s death led to a tenderness between the two men which was also reflected in Bose’s letters to Nehru which now ended with “Love” instead of “yours” or “yours affectionately”.

Jacques Derrida had such moments in mind when he wrote that “the great canonical meditations on friendship…belong to the experience of mourning, at the moment of loss, that of the friend or of the friendship”.

Some of the greatest obituaries in world literature have been written after the death of a friend. In a moving obituary after Thatcher’s death, Gorbachev recalled the comfort they had instinctively achieved. “She even took off her shoes and made herself comfortable in her chair. Everything happened near an open fire. It was, after all, December – and a difficult month at that. Yet it was warm inside and as we advanced, the atmosphere improved.

It was a rare case in the 20th century, marked by betrayal and betrayal, of two great world leaders of opposing currents forming an affinity at first glance.

The previous century also saw a friendship that overthrew Batista’s rule in Cuba and dreamed of bringing revolution to all of Latin America. The link between Che Guevara and Fidel Castro, doctor and lawyer, remains the hallmark of the communist tradition. The Cuban died five decades after the execution of his Argentine comrade, but when Castro’s final journey began, his ashes were first taken to Guevara’s mausoleum in Santa Clara. The two friends had been united in death.

Notably, just as the two enabled the first left-wing government in the Western Hemisphere, two young men from across the planet came together for a mission that would bring about India’s first right-wing government over four decades later. Their friendship began in the early 1950s, helped build a powerful political organization, lead a cultural movement and conquer the Indian psyche as LK Advani’s Rath Yatra transformed Indian politics. When the BJP convention started in November 1995, AB Vajpayee had been sidelined and then party chairman Advani was due to declare himself as a candidate for prime minister for the upcoming Lok Sabha elections. But he stunned the party by declaring his old friend’s candidacy. No one could believe it, not even Vajpayee who was getting up year after year then.

Indian politics has seen several friendships after independence, but most of them, like the one between Lalu Yadav and Nitish Kumar, are fraught with conflict or betrayal. By contrast, the freedom movement is a treasure trove of friendships, a time when a wide range of stalwarts with diverse ideas and ideologies formed intimate and loving bonds, engaged in public debates that shaped the movement as well as the nation. Whether it’s the link between Gandhi and Tagore or between Nehru and Patel. And then there was a connection with immense but unmet possibilities, and therefore may torment future historians for what it could not be. Despite their differing views on various issues, Nehru and Bose were brothers in arms and could have been much closer. What stopped them? The “endpoint of the relationship,” Rudrangshu Mukherjee notes in Nehru and Bose: Parallel Lives, was that the Bengali believed that “he and Jawaharlal could make history together. But Jawaharlal could not see his destiny without Gandhi. A sapling could not turn into a flowering plant because it remained under the shade of a banyan tree.

Friends also save you from political disasters, and perhaps nothing sums that up better than C Rajagopalachari’s intervention at a crucial time in MK Gandhi’s life. Gandhi called the Tamilian his guardian of conscience, who also became the father-in-law of his son Devdas Gandhi. The episode was about a woman whom Gandhi called his “spiritual wife”. While visiting Lahore in October 1919, Gandhi stayed with Rabindranath Tagore’s niece, Saraladevi Chaudhurani, a singer and writer. By then, Gandhi’s vow of celibacy was in its 13th year but, writes Ramachandra Guha in his biography of the Mahatma, he was immediately “enchanted by and by Saraladevi”. Gandhi soon returned to Lahore and wrote to his nephew Maganlal that “Saraladevi has showered his love on me in every possible way”. She started to feature prominently in Young India. They exchanged regular letters. “You continue to haunt me even in my sleep,” Gandhi wrote to him. The link “came very close” to being “sexually consumed” until Congress rushed to Rajagopalachari, who finally managed to convince Gandhi to stand down as it would bring him “indescribable shame and death”.

In the previous century, a German had gone even further. We know that Friedrich Engels enthusiastically enabled, promoted and reviewed the works of Karl Marx. Few people know that to save his friend’s public image, Engels even endorsed the paternity of an illegitimate child born of Marx’s union with his servant Helen Demuth.

That said, politicians have more help than friends. Even when they are friends, like Jayalalitha and Sasikala, it’s often an unequal relationship. Or they find friends elsewhere. Indira Gandhi had several close associates, but few people know that she had found a lifelong friend in American scholar Dorothy Norman, with whom she had a fascinating correspondence for more than three decades until her death. “I can tell you things I wouldn’t dream of telling anyone,” Indira once wrote to her. She bared her heart in these letters, but no one could hear of their exchanges until Norman published Indira Gandhi: Letters to an American Friend 1950-1984 after her death. The world then learned that the woman who was later to be called a “silly doll” had written as early as 1950 to her American friend about her marital crisis and her “growing sense of loneliness and isolation”. A few years later, she wrote of how “deeply unhappy” she was in her “domestic life” and how she had “missed the most wonderful thing in life, to have a complete and perfect relationship with another human being”.

Norman, who had sent him Beethoven records, had become his secret keeper.

The friendship also reveals a complicated truth told to us by Indira’s biographer, Inder Malhotra. From Feroz Gandhi’s death in 1960 to Nehru’s death four years later, she had written to Norman about the “intense fatigue” and “gloomy despair” she had faced, and yearned for “privacy and anonymity”. She even wanted to buy an apartment in London, give up politics and settle there.

Does it sound believable? Was the crown really imposed on him? After all, soon after becoming Congresswoman in 1959, Indira had pushed her father to unseat Kerala’s left-wing government. Malhotra comes to his defense. Unless these letters constitute a “carefully planned fraud to be perpetrated against historians a quarter of a century later”, wrote Malhotra, “the conclusion is inevitable that the only thing Indira did not want in June 1964 was the rental of the top room in India’s power structure.

But we can read another truth in his words. We often hide certain insecurities from ourselves. The anxieties that are visible to the world, but we don’t admit it to ourselves, maybe we can’t. We isolate ourselves from our own cruelties. Indira, after all, during the emergency years, had consistently declared that she never wanted power, that her love for her people was the only reason for suspending democracy.

The illusions we share with our friends are the ones we want our soul to believe in. We know that nobody trusts us, but we still want to be trusted, to be loved. And friends come to our rescue.

Friends are therefore the guardians of our secrets, our conscience and our illusions.