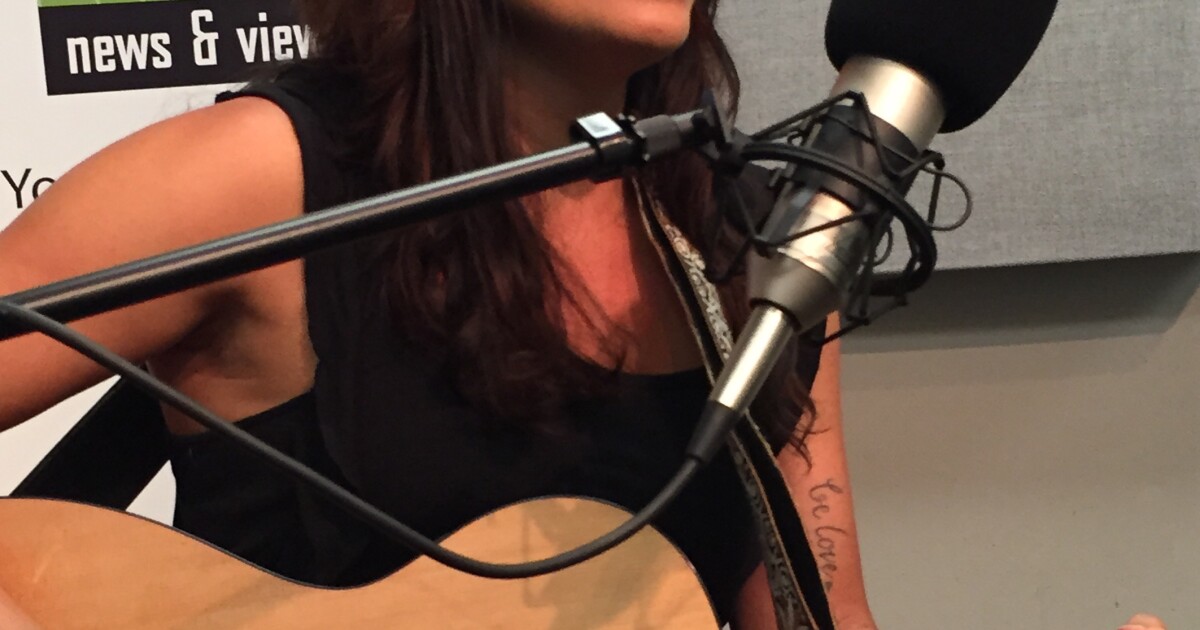 A seasoned member of the San Antonio music scene, Laura Marie has been performing concerts as a singer / songwriter for almost twenty years. In the late 1990s, she and a few of her musician friends started a group called Kingdom sofa. When this project dissolved in the early 2000s, she went solo and has been performing solo ever since. We had the chance to speak with her in the studio and discuss her writing, her journey and the evolution of the San Antonio music scene.

Miranda Whitus: One of the songs you performed in our studio, “Be Love”, you actually have a tattoo on your arm. Can you talk about what came first, the song or the tattoo?

Laura Marie: I’m pretty sure the tattoo came first. I don’t actually remember! It’s a saying with me for a long time … A long time ago I decided to write songs centered on love, not just romantic love, [but] sort of that unconditional, universal love, and to focus my career on songs of that nature because I felt like the world needed more. I need more of that. Then I got the tattoo somewhere along the way.

The song is actually based on the Prayer of Saint Francis. Years ago David Kaufman, a Christian singer-songwriter, wrote a song that I absolutely loved and that was based on Saint Francis’ prayer. I was not really a fan of Christian music, but this song really marked me and I decided that one day I would write a song that would also be based on this prayer. I think I was also just caught up in the turmoil that was going on in the world at the time, and that’s why I wrote it.

When did you start writing music?
I started writing poetry at a very young age. I think I was in elementary school when I started to write – as deep as it could be in fourth grade! – and I kind of kept pace. I was in the creative writing club in high school and had a few things published in the school publications, but when I left for college, that’s when [writing] has really become important. I suffered from very severe depression in my freshman year in college, and I really credited the lyric writing with saving myself from myself. I spent a lot of time skipping lessons, taking the bus and writing lyrics, not knowing how they were all going to be interpreted. I wasn’t in a band at the time, but I did it over and over … Eventually I met people and we started playing together, nothing really formal. I ended up dropping out of school and decided that when I got back I was going to study music.

What did you study?
I was a student of marine biology. This is not what led to the depression, but I also have a very great fear of deep water, which has not been helpful.

You’ve been working and releasing music since the 90s, so you’ve been a part of the San Antonio music scene for almost 20 years. As far as I know, you have never signed on any label … why?
I think a lot of people are doing it these days. First of all, I don’t think there was any interest in the label. When we were in a group there was some interest from management, but at that point the group members were in conflict as to whether or not to trust these people and that sort of made a difference. so led to our breakup, [though] there were other factors as well. When I started doing my first solo project, I had the interest of some kind of management, but as soon as they found out that I was pregnant, they were no longer interested, and that’s all. I think I have a little chip on my shoulder like, I don’t need you, I have internet now! It’s kind of when I was dealing with phobias and postpartum and I didn’t really want to leave the house and I was really doing everything from my computer and I kind of got very isolated and that’s just a few years later i started to recover from a lot of things i started to diversify and work with other songwriters. It is more and more difficult to find interest in labels, and when you do, you find that you could very easily end up getting lost because of them. I had friends that I went to high school with who actually signed up and toured all over the world and heard horror stories about how they still owe money, don’t earn a dime and still trying to pay back the cost of making their album with this big production that they had done. You’ve heard enough about it over the years, and you think it might not be such a bad thing not to be on a label.

How does it feel to be a mother, composer and musician?
It’s the same as being a mom and any other art, I guess. I think he’s unique to me [is]… I think artists tend to be obsessive, and it’s really hard to be obsessive when kids are shooting you. So for me to compartmentalize and stop the obsession in the middle of the song, because when I’m really focused on writing I’m totally focused, so shifting gears can be really hard and stressful. It took a while to get used to it, but by the time my second son was born he kind of took matters into his own hands and I had no choice but just walked in and put on his hand on my guitar strings saying ‘stop, it’s time for me.’ At this point, I’m practically bribing my older kid to be my roadie half the time, to wear my gear, which helps! And they were also an inspiration for some of the music. It’s good to be a mom.

You started working on an album, “Stars Apart”, this year. When do you think it will be released?
It should be released in August for my subscribers. Through Band Camp I have a small subscription service and I’m definitely putting it on them as soon as it’s done. I’m recording just down the street from here [the TPR studios] and we do the final votes for that. Then [it’ll go] to the public shortly thereafter.

You have been part of the South African music scene for many years now, can you give us a little bit of how that has changed?
Ah yes, that has changed. It used to be only rock and cover bands and I never got into the cover band scene because it’s never something I wanted to do … I had a lot lucky because unlike some musicians in San Antonio who depend on their income to survive, most of my income is spent on creating my art. I’ve had the luxury of just being able to take these shows where I can do my own music and that’s what I do for the most part.

Now it’s a little different. I’ve seen different parts of the music scene grow and seen others shrink, sometimes you can be really isolated from each other. I have seen a number of groups trying to come together and come together and help each other. I have seen great attempts in this direction, some successful and some not. I think we have to work together as musicians in San Antonio, I think we really benefit from each other’s experience and I think it’s really helpful. Especially with Facebook and Twitter, you see more musicians helping each other.

It’s difficult because you see the places come and go. This is the most difficult thing. The biggest changes are the loss of venues as a singer / songwriter because most of the time there aren’t a lot of venues for us to perform. For a long time I was at the Candlelight Coffeehouse and then they must have had no music for a while because they were having difficulty with the BMI and ASCAP licenses. Everyone wants a reduction in royalties and cannot afford to pay. they were charged [a rate] they thought it wasn’t fair, so they ended up giving up music altogether. I had been playing it regularly for two years, and [when] it goes, then the whole community there forgets you, and they don’t know where to find you, so you struggle to find a place to play. It’s a challenge, but you just have to keep going.

I see a lot of people like me doing restaurant gigs and stuff, where you could be more background music than the main reason people are there, which can be a bit exhausting. But that’s good because you can come to San Antonio and get paid to do that, whereas if you go to another city that has a lot more musicians then you probably won’t make a lot of money and be happy to. have a place to play.

What are your favorite places to play in South Africa?
I love Rift House Concerts, which is just a concert hall, not a hall, it’s someone’s house. Bar 502 is a fun place to play as it has great lights and lights and you are above the ground. It’s always a pleasure, when you get to do something like that, like Sam’s Burger Joint, with a real team and everything.

Beyond the messages of her music, Laura Marie puts her talents in the spotlight causes that fascinate her. She actively supports No More, an advocacy group for victims of domestic violence and sexual assault, the Joyful Hearts Foundation, the Human Rights Campaign and many others. You can find Laura Marie here: