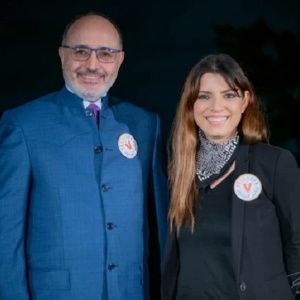 On Sunday July 24, Ghassan Ben Jeddou, chairman of the board of directors of the Al Mayadeen news channel, sent a message of congratulations to the entire team of the multinational “teleSur” on the occasion of its 17th anniversary.

In the letter, Jeddou praised teleSur’s journalistic professionalism and political commitment, as well as its strategic and humanitarian option:

“The foundation of “teleSur” was a strategic communication event. It is not only an information channel, despite its important work as a major successful media in Latin America and the world, but also a decision brilliant and wise of the eternal internationalist leader Hugo Chávez.

Today, on the occasion of the anniversary of its foundation, we can only express our great gratitude to teleSUR, for its journalistic professionalism, its political commitment, its strategic option and its humanitarian model.

A greeting filled with love to all the courageous, creative and firm workers and communicators of this chain in resistance, whose consolidated principles have transformed it, in the face of various pressures, into a reference for all the free peoples of the world.

TeleSUR resists and grows. This is the best reference to know what is happening in Latin America and the Caribbean @teleSURtv #Telesur #Aniversario #AmericaLatina #24Julio #24Jul

A tribute charged with our high consideration and our deep respect to the management of teleSur for his success at the head of this multi-platform that has become one of the most important international media.

An affectionate and combative greeting to the fighter for the cause of the peoples, the president of teleSur, Mrs. Patricia Villegas. Patricia not only leads this influential sister media, but she is also an icon of communication in the countries of the South and in the world.

With Patricia and teleSur, we have established a knowledgeable, professional, sublime, honest and influential communication partnership.

We at Al-Mayadeen Media Network will continue this partnership and bilateral collaboration with full depth, solidity and strength, and above all with a long-term vision.

On behalf of all the children of “Al-Mayadeen” to all our friends and colleagues, our sincere congratulations on the 17th anniversary of the founding of “teleSur”.

#Anniversary | teleSUR celebrates its 17th anniversary this Sunday, raising the voice of those who demand to be heard and fulfilling its daily commitment to accompany the struggles of the people pic.twitter.com/5HPvcaT9SM


With all my heart, I send my most sincere congratulations to the colleagues of teleSur and to the dear captain of this ship, Patricia. I do so with the conviction that this pioneering and Latin American media, headquartered in the beautiful capital Caracas, a city whose moral value continues to grow in the hemisphere and in the world, of a victorious Venezuela which has overcome conspiracies and sanctions, blockades and distortions, led by beloved President Nicolas Maduro, resembles the unbreakable Venezuela, its wonderful people, its militant leadership and its President, symbol of resistance and victory.

Telesur is a multiplatform born in 2005 under the name of New Television of the South, with the mission of countering hegemonic media campaigns and informing with responsibility in the service of peoples, their realities, stories and struggles”.