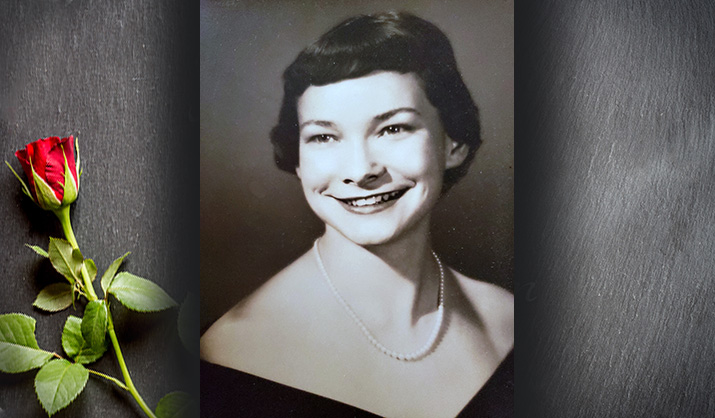 Born Beverley Ann Swall, on November 24, 1931 in Tulare, California, Ann is the first girl to be born in three generations. She was a special gift to the world and returned so many gifts to the world.

Ann was meant to be special from the day she was born. As a young girl, Beverley decided to go by her middle name, Ann.

Ann met the love of her life, Raymond Schmidt, on a blind date. They became Ray and Ann Schmidt, married on January 28, 1956, and raised seven children together.

During her children’s school years, she was very involved in school activities in addition to being a Girl Scout troop leader and a Boy Scout den mother. Ann has provided many thoughtful creative projects for the children. She had a special gift for arts and crafts.

Thanks to Ann, the children enjoyed outdoor adventures, hiking and camping. Every summer, Ann and Ray made sure their offspring could enjoy summer vacations, camping and fishing. In a station wagon pulling a tent trailer, Ray and Ann and their children came to a halt, as the whole world came to a halt, as man landed on the moon on July 21, 1969.

Ann Schmidt is also why your dog in Phoenix should be on a leash at all times. She was the catalyst for the adoption of this law. Ann was also active in Block Watch. She enjoyed civic duty, knocking on strangers’ doors to register voters and serving as a poll worker, while raising seven children and growing beautiful passion flowers in the backyard.

As her seven children entered adulthood with jobs and children, Ann began her professional career working for the Phoenix City Police Department, then the Parks and Recreation Department before taking his retirement.

This decade was particularly difficult, with Ann and Ray losing two daughters to breast cancer.

Ann and Ray have become advocates for breast cancer research. Once again, the ever-talented Ann created a delicate flower with a pink bow on a safety pin, handcrafting thousands of pins. Ann, with Ray by her side, greeted and cheered on thousands of walkers at many events year after year. Walkers supporting breast cancer research began to search for them both, exchanging hugs for Ann’s flowers. Each flower was a simple gift of love and support for each of them.

For Ann and her beloved husband Ray, life always included service. First Camp Verde, being on call to help people with community resources, then alternating between Sun City and Payson, volunteering time to serve lunches to the homeless in downtown Phoenix, to turn bags of groceries recycled into rugs for the homeless while living in Payson.

Ann was all about family, immediate and extended. She devoted her life to genealogical research long before computers and the Internet. Her travels with Ray have been many and fun, exploring how the family tree came to be. Attending family gatherings every 2-3 years has become a way of life. She treasured birthday lunches with her grandchildren.

While Ray watched the football game and prepared to cook his dinner, Ann quietly took a nap and passed away peacefully. Ray lost his wife, Ann, after 65 years of marriage and their life together, on January 22, 2022.

What happens after you die? You are missed by all who had the honor and privilege to know and love you. Goodbye sweet wife, loving mother, loving grandmother, neighbor and friend. Rest in peace Anna.

She was predeceased by her daughters Kathy and Karla. She is survived by her husband Ray, her children Kary, Steve, Joe, Karol and Kelly, and 11 grandchildren.

A private funeral mass for the family is planned. In lieu of flowers, donations may be made to the Society of St. Vincent de Paul, PO Box 13600, Phoenix AZ 85002 in Ann’s memory.

Condolences can be shared at menkefuneralhome.com.