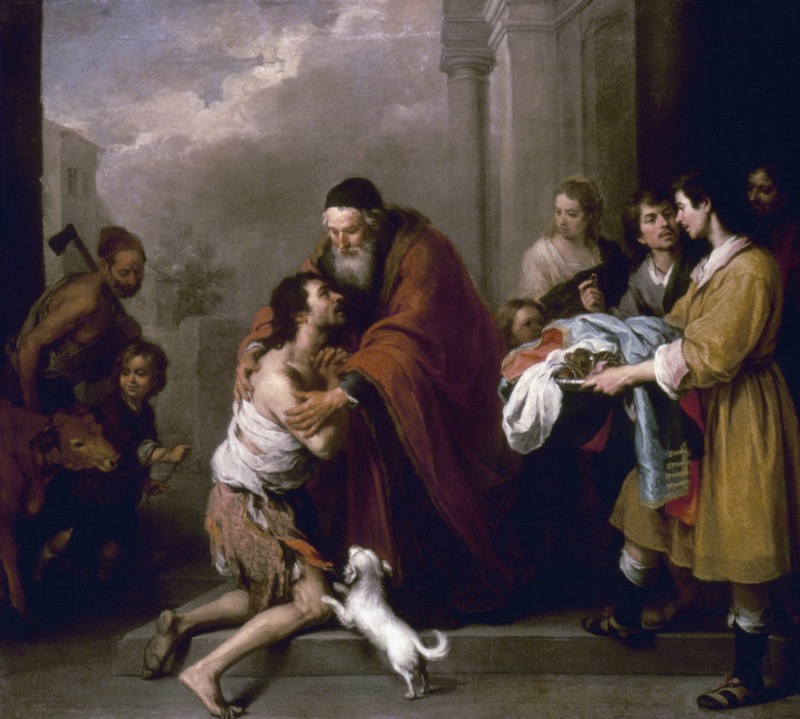 The conventional view of this, perhaps the best known of all parables, is that the villain of the play is the debauched younger son. But, in fact, one could say that the three directors, the two brothers, as well as their father, behaved badly, although from different points of view and according to different expectations.

Again, the conventional view of the parable is that it is about forgiveness and, of course, on some level it is: but virtually everything in the Gospels is about forgiveness. This particular parable is not primarily about forgiveness, but about the roots and futility of that insidious, irrational tendency toward spiritual self-harm from which all (with two exceptions) human beings suffer, whose religious name is sin.

The parable opens with the words, “There was a man who had two sons,” and goes on to tell how the wayward and younger son is lost and found. But the parable speaks of two lost sons, not just one: both exclude themselves, albeit in different ways, from the family circle, one through explicit and public behavior, in the eyes of all, the other , as he only emerges at the end of the story, in his heart rather than in public, and much less ostensibly.

The parable then tells how the father found his youngest son; we are not told what happened to the eldest. The youngest son abandoned the safety of the family in search of freedom, a false freedom, as it turns out and which he was soon to discover. But by seeking his illusory freedom, he unpardonably exposes the family to ruin by dividing the estate in order to have his share of the inheritance prematurely. His actions could be interpreted as an unforgivable insult to his father by treating him as if he were already dead. But his father’s indulgence in allowing him his inheritance would also have been considered unforgivable, even a foolish plan.

The older brother, less impetuous and ostensibly more devoted than his brother, remained at home united with his father – or so it seemed. There are cultural details that add to the power of the parable. The youngest son resorts to an occupation unthinkable for a nice Jewish boy: he keeps pigs in the pay of a nice guy. And when, finally, and quite selfishly, he realizes his mistake, mercenary desperation rather than real grief drives him back.

Considering the shame of his situation and the insult to his father, one would have expected the father to punish his son. But not only does he not punish him, he humbles himself, running ahead of his servants to meet the boy, thus making himself a laughing stock. Running was for slaves and children, not for dignified old men and certainly not for a family man. The Book of Sirach in the Old Testament says, “The way a man walks tells you who he is. (19:30) And Aristotle says somewhere: “Great men never run in public”.

But the father clearly has nothing to give a damn about conventionally dignified behavior: overjoyed to see his son coming back from afar, he runs to meet him. Luke’s message at this point in the story is clear: God sees us in the same way that the beloved father in the parable sees his wayward son: he reaches out to us, long before we return to him. Indeed, our backtracking is the result, not the cause, of his contacting us. It is not for nothing that medieval commentators thought that this aspect of the parable was the whole Gospel in microcosm, calling it the Evangelium in evangelio. It dramatically describes not only the movement of grace within us as individuals, but the Incarnation itself.

Now, according to the conventional reading of this parable, we are supposed to oppose the two brothers: the younger is irresponsible, a debauchee, a libertine, the other a serious and responsible valiant. The text, by the way, says nothing about the free life of the younger son: as has been pointed out, the translators were duped by the elder brother’s vindictive slander later in the story. All we are told is that the younger son has messed up and squandered his inheritance on childish and unnecessary pleasures.

But it’s not what he did while he was away that’s considered significant: it’s the fact that he turned his back on true happiness and instead opted for something that would inevitably lead to his misfortune. His sin is his irrational failure to cherish all that he already possessed, which gave him genuine happiness and fulfillment, namely, in this particular case, the love, loyalty, friendship and affection that surrounded him; instead, he chose to take the high road that only led to misery, unhappiness, and his downfall. His situation perfectly illustrates the well-observed fact that we are punished by our sins and not for them.

But any contrast between the two sons is only superficial. The failure of the eldest son is certainly much less dramatic, and certainly less flagrant, than that of the younger son. But the surest sign of the older son’s less obvious but equally serious failure is his resentment, the darkest and most destructive of all human emotions, which only emerges at the end of the parable. Much like his younger brother, he too values ​​the material benefit he gets from his father more than the love and affection his father has for both of them. In other words, both sons have fallen into the same trap, albeit in different directions: both value gifts more than the giver. And that’s the crux of the parable, because that’s what we all do when we sin.

Sin does not consist in wanting bad things: there are no bad things, not in themselves, at least. How could there be: God created everything? No, we always want under the rubric of the good, that is to say of the desirable, of the sought. Sin, however, opts for less than you really want; or wanting the wrong right thing, something in the wrong place or at the wrong time or with the wrong person. To sin is to be hypnotized and misled in the moment by a biased sense of priority and value. It’s wanting something relatively unimportant, when we can have something authentic and lastingly fulfilling and worthy of our love.

The climax of the parable is, of course, the father’s reaction to his two sons: his love is equally lavish for both, manifest in the case of the younger by the way he treats him on his return – rings, sandals , fatted calf, etc. – but no less sumptuous for his eldest son. Despite the grave insult in this culture to refuse to go to the banquet and play his role as the eldest son, the father reassures him that his position has not been supplanted – remember, the slaughter of the calf Bold was reserved for the wedding of the eldest son of the family or a visit from a Big Wig. The father’s love for his eldest son, his heir, remains intact: he says to him explicitly: “All that is mine is yours. The climax of the parable is clear: there is nothing we can do that can lessen God’s love for us, not even one iota.

No matter how much distance we think we have put between us and God, he is closer to us than we are to ourselves. And, what’s more, he is ready to do anything to convince us that he loves us unconditionally. In this sense, the parable of the prodigal son is a parable both of the Fall in the Garden of Eden and of our redemption in the Incarnation. In his humble love for us, God was willing to endure the worst that we human beings can do to each other, in order to persuade us that his unconditional love is like that – that is – of a beloved father. . This awareness alone is enough to make us realize how childish our sins are: more regression than transgression.