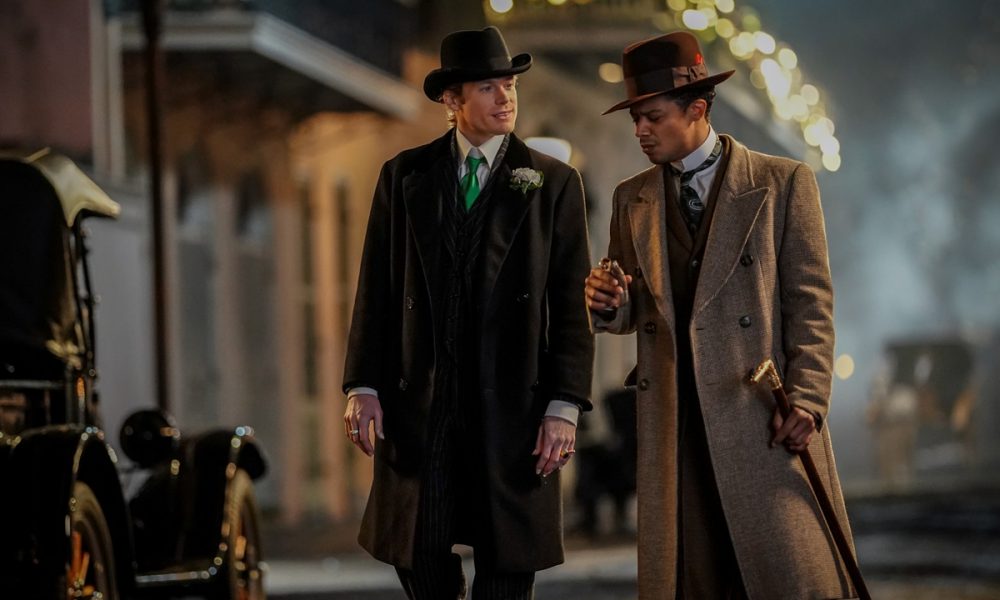 Fox’s New Nighttime Musical Soap “Monarch” is to country music what the “Empire” of the network was to hip-hop. Complete with over-the-top characters, family intrigue, infidelity and tragedy. Oh, and some weird characters too. Among those characters is hairstylist and makeup artist Earl, played by actor and singer Kevin Cahoon. As well as being the occasional much-needed source of comic relief, Earl also plays the irreplaceable best friend of country music queen Dottie Roman, played by none other than Oscar winner Susan Sarandon. Luckily for us, Kevin was kind enough to take time out of his schedule to answer a few questions.

BLADE: I first knew you as a performer through your music and your group Ghetto Cowboy. Your debut album “Doll” won an OutMusic Award in 2006. When you think back to that time, what do you think of it?

Kevin CAHOON: This is one of the proudest accomplishments I have ever had in my life; winning an OutMusic Award for “Doll”. It really is! It’s on every biography, every resume. I was so proud to have received it because, in a way, I came from the theater, and to do it as my first foray into music, creating rock ‘n’ roll and pop songs; it was just like the warmest embrace. I was so honored to receive this. This whole period of my life, with Ghetto Cowboy, and playing in all these amazing venues, like Don Hill and CBGB’s. To have been part of that and to have been part of the queer music scene at that time was special. The LGBTQIA community continues to move forward, striving for equality at all levels. But at that time it was (during) “don’t ask, don’t tell”. That was before marriage equality.

CAHOON: Yes, that was even before “RuPaul’s Drag Race”. The culture had no understanding of this music and these people who were really making this music. So it really felt like the strangers were pushing their way through the door. I even felt that way when naming the band Ghetto Cowboy. I thought, “People who are disenfranchised and pushed to the periphery of society are forced to live in a ghetto. Whether it’s a Jewish ghetto or a Spanish or African American ghetto, or even rural Appalachians or rural parts of this country, they’re being pushed, pushed, pushed to the frontiers. Naming the band I thought, “Oh, this is it. We’re going in. We’re going to be cowboys in this and we’re going to claim our right from the outside. That was an amazing time, and it was so exciting, and it was one of the greatest moments of my life.

BLADE: Have you had time to work on new original music?

CAHOON: I have not, and I want. I think about it all the time. It’s coming, I promise. I have an idea for the long-awaited second album [laughs].

BLADE: As you mentioned, at the same time that you were making this music, you were doing a lot of theater and you continued to focus on your acting career. Would you say that you are a singer who plays or an actor who sings?

CAHOON: I would say that I am an actor who sings. Even with rock ‘n’ roll, it came from a place of character and a place of history. I felt like I was playing a character when I faced my group.

BLADE: You are currently in the new Texas series “Monarch” from Fox in which you play Earl Clark. What did you like as an actor in the character of Earl?

CAHOON: First of all, it’s a network series with Susan Sarandon and Trace Adkins. It was a giant call. As an actor, I was connected to the world because I grew up in Texas, I grew up in rodeo and I have a real thing for it, if there’s a pair of cowboy boots and a cowboy hat, I’ll take them and put them on. I like the whole aesthetic. I like the world. I love the stranger who goes out into the plains and claims his own property. This is the world of “Monarch”. This show biz, country-western family. It’s the juiciest fun soap opera you can imagine.

BLADE: It’s very much in the mold of a classic nighttime soap opera.

CAHOON: He is! In the greatest way. Who doesn’t like that? We all loved ‘Desperate Housewives’, ‘Nashville’, ‘Dallas’ and ‘Dynasty’. The character (that I play) was inspired by a real person named Earl Cox. He’s the first hairstylist for every country star you can imagine. So the creator (“Monarch”), Melissa London Hilfers, saw his place in their world and thought, “Let’s create a character that takes inspiration from him.” So it’s vaguely inspired, but she ran with it. I (Earl) have worked for the family for decades. I was best friends with Dottie Roman, played by Susan Sarandon. The series evolves as you get to episodes six, seven, and eight, more is revealed about what Earl knows and how long he’s been around. He lives on the ranch (The Brambles) with the family. We shot at this amazing 140 acre ranch just outside of Atlanta. It was a dream. The job was a dream. I pray that I keep having more of this dream [laughs]. We’ll see what happens when it comes to season two.

BLADE: I’m so glad you said what you did about Earl and Dottie. There is a palpable exchange of affectionate feelings between them. Would you agree that without their gay hair and makeup artists, most country divas would end up looking like Marjorie Taylor Greene?

CAHOON: Gay people are the driving force behind the country music industry’s pickup truck. I say Earl Clark showed up at The Brambles with a suitcase full of rhinestones and a dream. Her dream was to be in show business. Being close to an iconic country music diva, which is Dottie Roman, played by Susan and he loves being so close to the first lady, and he loves her place as the main guardian of the domo. He will do everything in his power to keep this position. I think he loves to dress up. In the show, they have a fantastic rockabilly hairstyle for me and great shiny clothes. I told the wardrobe and hair team that he loves doing makeup as much as he loves doing Dottie makeup. It should be part of its essence. That he likes to be seen and he likes to show off and I think they accomplished that with their amazing wardrobe and hair.

BLADE: Is there a possibility that Earl has a love interest?

CAHOON: There are. If a season two happens, I think it’s in the pipeline.

BLADE: The queer energy in “Monarch” is powerful with you and singer/songwriter Beth Ditto, who plays Dottie and Albie’s (Trace Adkins) daughter, Gigi, representing us. What is it like working with Beth?

CAHOON: We fell in love immediately. I’m from Texas, Beth is from Arkansas. We fell in love with Zoom. That’s how much I love him. She said to me on Zoom, “Oh, I can tell I’m going to fall in love with you.” And I said, “Well, I’ve loved you for years because I know who you are. I’m afraid you’ll be stuck with me for the rest of your life. We have a daily text exchange, Beth and I, which I cherish, and it happens late at night, usually, because we’re both night owls. This text exchange may be about how much we both love Ritz crackers [laughs]. It can go deep or surface. But I love and cherish her, and I’m so lucky to have her in my life for the rest of my life.

BLADE: Could there ever be a creative collaboration between Kevin and Beth?

CAHOON: Yes! Go on. I would die and go to heaven. It would be a dream. Maybe we can find a song for the show.

BLADE: Fantastic. Will the audience of “Monarch” one day have the chance to hear you sing?

CAHOON: Well, I hope it’s something else in season two. Let’s find a boyfriend and get a song.

BLADE: “Monarch” is set in Texas. As a Houston native, what do you think of the way Texas is portrayed on “Monarch,” as well as other shows set in the state?

CAHOON: Texas is such an interesting place. Because you have these hotbeds of liberal progressivism.